The covering on the inside of the Sanctuary was made from ten individual curtains made from finely woven white linen. Blue, purple and scarlet yarns were embroidered on the curtains with Cherubim designed in the pattern.  Exodus 26:1-6

Each curtain was 42 feet long by 6 feet wide. Five curtains of woven tapestry were then coupled together with one another, and the other five curtains were joined together, too.  Each “set” of five curtains had 50 loops of yarn on the edge of the end curtain.  Fifty gold clasps through the loops held the curtains together, forming a single tent-like covering over the wooden framework of “boards”.

The colors of blue, purple and scarlet will be used again for the Veil between the Holy Place and the Most Holy Place (Exodus 26: 31-35) or sometimes called Holy of Holies (Numbers 4:19, 20).  God uses these special colors as a reminder that He is Yahweh.

Scripture describes Cherubim as surrounding the LORD, so it seems right that their symbol is used throughout the Tabernacle. “So the people sent to Shiloh, that they might bring from there the ark of the covenant of the Lord of hosts, who dwells between the cherubim.” 2 Samuel 4:4    “O Lord of hosts, God of Israel, the One who dwells between the cherubim, You are God, You alone, of all the kingdoms of the earth. You have made heaven and earth.” Isaiah 37:16

I hope you are as excited about God’s perfect plan for His earthly dwelling place as I am! 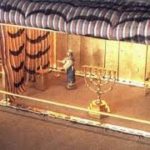 Before God gave Moses the instructions for the Tabernacle, there was already one being used called the “Tent of Meeting” in Exodus 33:7-11:“ Now Moses used to take a tent and pitch it outside the camp some distance away, calling it the “tent of meeting.” Anyone inquiring of the Lord would go to the tent of meeting outside the camp.  And whenever Moses went out to the tent, all the people rose and stood at the entrances to their tents, watching Moses until he entered the tent.  As Moses went into the tent, the pillar of cloud would come down and stay at the entrance, while the Lord spoke with Moses.  Whenever the people saw the pillar of cloud standing at the entrance to the tent, they all stood and worshiped, each at the entrance to their tent.  The Lord would speak to Moses face to face, as one speaks to a friend. Then Moses would return to the camp, but his young aide Joshua son of Nun did not leave the tent.” NIV

I can just picture this in my mind! I know this can be confusing because God gave Moses the instruction for starting the Tabernacle in Exodus 25; so how can I say that the Tent of Meeting was “before” when it is talked about in Exodus 33? First of all, I have learned that the Bible is not written in chronological order! That was a big discovery for me!  I have read the Bible in chronological order and am amazed how clear it becomes to me!  So, maybe that’s what happened here.  But, I have to admit (with a silly grin on my face), that I got that information from the Nave’s Topical Bible under: Tabernacle!

“TABERNACLE: One existed before Moses received the pattern authorized on Mount Sinai, Ex. 33:7-11. The one instituted by Moses was called SANCTUARY, Ex.25:8…..” Nave’s Topical Bible

There were two rooms in the Tabernacle Sanctuary building.  The first room, on the East side was called the “Holy Place”.  The priests would enter the Sanctuary by the entrance door curtain into the Holy Place.  In this room were the “Lampstand”, the “Showbread Table” and the “Golden Incense Alter”.

The inner room was the “Holy of Holies”, where only the “High Priest” was permitted to enter, once a year.  This was where God’s presence of glory over the Ark of the Covenant appeared.  These rooms were separated by “The Veil”.

The Sanctuary building was made from acacia wooden “Boards and Bars” overlaid with gold.  There were four coverings over the Sanctuary:  a “Cherubim Embroidered Covering”; then a covering of “Ram’s skin dyed red”; next woven “Goat’s Hair covering”; and finally the “Outer Covering.” 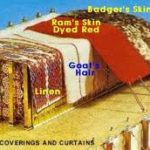 My goal is to describe each of these pieces in as much detail as I can find. I hope you will join me for the journey!

I find it so amazing that God’s instructions to Moses were so precise for making the tabernacle and all it’s furnishings.  I have been looking up references in the New Testament which are evident that God was always thinking of His Son and the redemption of His people!  His plan has always been for salvation!  God knew that the Israelites needed somewhere to worship Him. He wanted it to be a sanctuary that would serve to remind them of His faithfulness and His holiness!  Even though they didn’t know it, someday they would see how all of it pointed to their Messiah!  The LORD knew, too, that they were not ready to move into the Promised Land right away.  They had a lot to learn about Him and about living a free life.

I think about the golden calf that they had to have when they thought Moses had deserted them.  God made man in His image and there is this desire to follow and worship… something!!  In Exodus 32 they asked Aaron to make them “gods”. (Verse 1). It had only been a short time since they had been in the very presence of God at Mt Sinai! (Exodus 19)  They had all agreed with God and said, “All that the Lord has spoken we will do it!” Exodus 19:8 NKJV  Short memories are dangerous!  Little faith is even more dangerous!!

I can’t help but see myself in those foolish Israelites! How often have I seen God at work in my life and then forgotten so easily when things changed! I have to admit that I’m not as “forgetful” as I used to be when I was younger!  I guess age does have its advantages!  I can say I have seen and know that God is faithful and no matter what happens, He does make all things work together for good! (Romans 8:28)  Whenever I become discouraged with someone young, I am reminded that I, too, could forget so quickly at that age just what an awesome God He is!!  I hope you will join me in praying for our young people in the world today!  I think I will add to pray for the adults in their lives that they would be given wisdom!

Tomorrow, I want to start talking about the Tabernacle. I, honestly, thought I would be writing about it today!  But, God has not allowed my mind to concentrate on the very thing I have been looking forward to talk about!?  When it is right, I will know. It really is so amazing that I don’t want to feel rushed and perhaps leave any detail out.

Until then, I appreciate you, My Fellow Pilgrims! This road we travel has many twists and turns; many mountains and valleys!  Just keep looking UP and following His leading!

“For I know the thoughts that I think toward you, says the Lord, thoughts of peace and not of evil, to give you a future and a hope. ”  Jeremiah 29:11 NIV