Like I have mentioned before, to me studying God’s Word means more than just reading it! I want to know why He did certain things the way He did! I know it isn’t possible to know the mind of God; but, I’m pretty sure He was hoping we loved Him enough to look into His Word with some curiosity and hunger to know Him better!  After all, He made us with a mind to think outside the box.  When we consider how far civilization has come since Moses and the Israelites were in the wilderness; we know we got here because someone wasn’t content with the way things were!!  I think of when we didn’t even know what a television was, for example.  Now we have to have one for every room!  I could go on and on, but you know what I mean!

So I have been thinking of the Ephod and the Breastpiece; I realize there is a lot more to study regarding the High Priest’s clothing. There is even more on my mind that I haven’t even begun to touch on!  But, I want to take some time here and reflect on some of the symbols we have already studied.

These symbols figured largely in the symbolisms of the tabernacle furnishings, and priestly vestments and functions, as types and shadows of the atonement.” Nave’s Topical Bible p213

The gold that was embroidered into the Ephod and the Breastpiece symbolizes Christ’s heavenly ministry as great High Priest for us. The stones on each shoulder-piece of the Ephod, each with six tribes’ names written on it, symbolized that Jesus is the Good Shepherd that knows His sheep and goes after each one that is lost (Luke 15:4).   The shoulder stones represent Jesus bearing all of His people before God in heaven as He intercedes for us (Romans 8:34, Hebrews 7:25).

The twelve precious stones on the Breastpiece, one for each of the twelve tribes engraved upon them, shows the Good Shepherd knows His sheep so well He calls them each by their own name (John 10:3). The High Priest bears the names on the Breatpiece “over his heart” when he goes before the Lord “as a memorial” (Exodus 28:29) which foreshadows the eternal love of the Lord Jesus for His sheep    (John 3:1).

All this is not for those who do not believe. Sadly, they are not yet written on His heart. They are like the rich man in Luke 16:19, whose name is not even known; compared to the name of Lazarus who is known even to Abraham (read Luke 16:19-31).

All of the Priestly garments and items have a wonderful significance. Once we understand what these tell us about our heavenly High Priest, Jesus, we will understand how thankful we are to God and want to draw even closer to Him! (read Hebrews 13:15; 10:22) 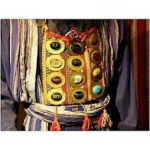 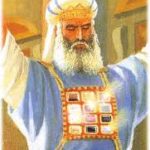 Sorry, Fellow Pilgrims,  but due to becoming Great Grandmother again this evening; there won’t be a new lesson on Wed, Sept 14.  My New Great Grandson, Andrew Jackson, was born weighing in at 7″#  !  Making us very happy and very proud!  Thank you, LORD, for the miracle of a birth!  May his name be written always on The Palm of Your Hand!