God gave Moses the instructions for the courtyard of the Tabernacle in Exodus 27:9-19. It was to be made in a rectangle bordered by walls of curtains hanging on posts. These curtains were not colorful like the curtains of the Sanctuary.  They were made of white fine twined linen and were 7 ½ feet tall.  The curtains blocked the public view into the courtyard.   In the Bible, white linen signifies righteousness.   “And to her was granted that she should be arrayed in fine linen, clean and white: for the fine linen is the righteousness of saints.” (Revelation 19:8)  The courtyard was 150 feet by 75 feet wide and there was only one entrance! 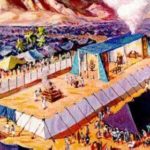 The entrance, (“door”, “gate” or “screen”) to the courtyard was “on the east side towards the rising of the sun” (Numbers 2:3).   The Door was made from fine white linen with blue, purple and red colors woven into it, but this curtain did not have cherubim like the curtains in the Sanctuary. “Jesus said, “I am the Door; if any man enters through Me he shall be saved.” (John 10:9) The entrance curtains hung on four strong wooden pillars that were based in bronze sockets, with silver caps, just like the other pillars of the Outer Court. The entrance gate was fastened to the pillars with gold hooks.

When entering the Tabernacle courtyard through the Door to the Outer Court you would be facing West, which is different from other religions that have their people facing the East.  There was only one way to the place where God had chosen to dwell and that was through the only entrance to the Outer Court!  There is only one way to God today and that is only through Christ Jesus!   “Jesus said to him, “I am the way, the truth, and the life. No one comes to the Father except through Me!” (John 14:9)

“Thus the children of Israel did according to all that the Lord commanded Moses; so they camped by their standards and so they broke camp, each one by his family, according to their fathers’ houses.”  Numbers 2:34

Even when the people moved from place to place and the tabernacle had to be torn down and moved, EVEN THEN, God’s Tabernacle was the center of His people.  If you could have viewed this from above, you would have seen the formation of the “cross” with God’s tabernacle in the middle!  He truly is an amazing and awesome God!!! 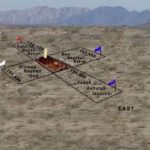