“And the Lord spoke to Moses, saying:  “Speak to the children of Israel, and get from them a rod from each father’s house, all their leaders according to their fathers’ houses—twelve rods. Write each man’s name on his rod.    And you shall write Aaron’s name on the rod of Levi.   For there shall be one rod for the head of each father’s house.    Then you shall place them in the tabernacle of meeting before the Testimony, where I meet with you.     And it shall be that the rod of the man whom I choose will blossom;  thus I will rid Myself of the complaints of the children of Israel, which they make against you.”   (Numbers 17: 1-5 NKJV)

After Korah and his followers had complained about Moses and Aaron, God chose a miracle to prove once again that He was their LORD;  and that it would be GOD … and only  GOD  that would decide who would be His priests!   You would think that after God had made the earth to open up and swallow these men, their families and all their belongings, that the complaining would stop!  Even after that, the 250 complaining men who were offering the incense without authority were consumed by the fire sent by the LORD!    That still wasn’t enough, and 14,700  more complainers were to die with a plague!  Yes, I think God was going to do something to stop the complaining and convince them once and for all with a sign they couldn’t forget !!

So Moses took all the rods from the twelve tribes and put them before the Ark of the Covenant. I picture the rods to be like the one Moses used and all the shepherds used.  We read in Psalm 23, “His rod and His staff, they comfort me”. These were not made from a live tree, but were of dead wood.  Only God could make a dead piece of wood blossom!  And Moses had placed them there before the Ark, which was the place where God dwelled among them!

“Now it came to pass on the next day that Moses went into the tabernacle of witness, and behold, the rod of Aaron, of the house of Levi, had sprouted and put forth buds, had produced blossoms and yielded ripe almonds.”  (Number 17:8) 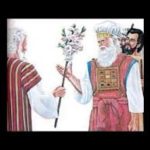 Not only did the rod have blossoms on it….it also had buds and ripe almonds!  It was in all the stages that an almond branch would ever have on it!  Our God truly is a magnificent God and wants to be sure we know and honor All that He is!!

One of my favorite things about the Tabernacle is the Ark of the Covenant and all it stands for!  After each of the other tribes had gotten their rods and could plainly see nothing had changed on their rods; God instructed Moses to put Aaron’s rod in the Ark!  It was to be kept as a reminder to the children of Israel that God had chosen Aaron to be His Priest!

Besides the tablets with the Ten Commandments that they had broken and the bowl of mania that they had complained about; the Ark now contained the miracle of a dead piece of wood with Aaron’s name on it, with buds, blossoms, and almonds because they had rebelled.  When the Priest would cover the Ark with the blood of sacrifice, it covered these reminders of Israel’s sin!  God would “see” the blood  “covering” their sin, and atonement was made!

The precious blood of Jesus covers our sin and God sees that atonement has been made!  Praise the name of Jesus!