We have talked about the Breastplate and the Ephod  God gave Moses exact instructions on exactly how the Tabernacle and all it’s furnishings were to be made.  He also gave specific descriptions of the Priestly Garments.  The Robe was to be made from fine woven linen dyed blue.  It had an opening in the top to be put on over the head and was formed carefully of one piece, much like the robe of Christ (John 19: 23 “Then the soldiers, when they had crucified Jesus, took His garments and made four parts, to each soldier a part, and also the tunic. Now the tunic was without seam, woven from the top in one piece.”)  The neck was reinforced with a woven collar so it would not tear.

Attached to the hem of the Robe were pomegranates made out of blue, purple and scarlet yarn.  In between the pomegranates were gold bells.  The bells were hung between the pomegranates, which were used, it seems, to announce to the people when the High Priest entered the Holy of Holies so they could pray for him, and also to remind him of the priestly clothing the Lord had instructed for him to wear.  No one, but the High Priest could go in there, but coming into the presence of God was really a hazardous job.  When they first started their ministry as priests, two of Aaron’s sons, Nadab and Abihu,  died on the very first day.  God was very specific about His instructions and when they didn’t obey in every detail, they were consumed by a strange fire. (see Lev. 10:1,2; Num. 3:4; 26:61)

When the high priest came in before God, coming into the very presence of God and ministering before Him, everything had to be just right, if it wasn’t the high priest could die. If they heard the bells, they would know he had not been consumed by the Lord’s anger while fulfilling his duties. They would tie a rope on his foot, and if the bells would quit ringing they would drag him out. 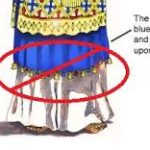 The only information I could find about the “skillfully woven tunic” was a garment woven out of fine linen cloth fastened at the neck, and reaching far down the person, with the sleeves terminating at the elbow.(ref. Ex.28:39,40 and Lev.8:7) 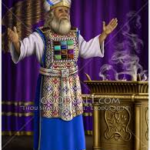 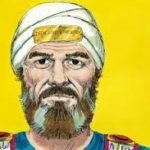 The Turban was also called the “mitre” “Something rolled around the head.  The Turban or headdress of the high priest made of fine linen cloth, eight yards long, folded around the head. On the front was a gold plate on which was inscribed Holiness to the Lord.”  Ex. 28:4, 37, 39; 39:28, 30 and Lev. 8:9″  Smith’s Bible Dictionary

I hope you have learned a little about the clothing of the Priest.  I know I have!