The Passover meal is called the Seder. The Seder is a family event, and the table is decorated with flowers, candles and the various Passover elements, including shank of bone of the lamb, unleavened bread called “matzah”, bitter herbs, greens, salt water, hard-boiled egg, a sweet dish called “charoset”, and the four cups of wine.  Many people have a special Seder plate with sections, as well as a “matzah tash” a covering for the unleavened bread that has three compartments.  A special book called the “Haggadah” is used for the purpose of telling and living out the story of Israel’s deliverance from slavery in Egypt.  The “Seder”, meaning “order”,  is the telling of the story!

Yesterday I left off with the Seder plate. Today, I will continue with the things on that plate:

After the story of Exodus is told by using the Seder plate’s contents, the deliciously prepared meal is served. It is a time to eat and enjoy being together. But, the Passover Seder is not over yet. 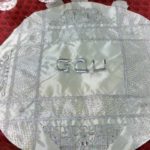 “For Jesus the Messiah would have taken the middle one of the three pieces of matzah, ..broken it as His body would be broken” (just His body.. as none of His bones were broken),” wrapped half in a linen napkin for burial, hidden it as He would be buried, brought it back as He would be resurrected, and distributed it to everyone seated with Him, as He would distribute His life to all who believe. As He did this, He was conscious that this middle piece of matzah represented His own, spotless body given for the redemption of His people.  As the matzah is striped and pierced, His own body would be striped and pierced, and it is by those wounds that we are healed! (Read Isaiah 53:5)  This middle piece of matzah, or the Afikomen, is our communion bread.”  Taken from a book, “Passover A Time for Redemption” page 8

Tomorrow, we will finish the Passover Seder meal by studying the remaining “cups “. I hope you are enjoying this as much as I am!!  God just continues to amaze me over and over again!!

2 thoughts on “PART 2 of the PASSOVER”