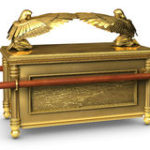 God gave Moses the directions for making the Ark of the Covenant in Exodus 25: 10-22.  The Ark of the Covenant, also known as the Ark of the Testimony (v 22);  is best know of all the furnishings of the Tabernacle.    It was a small wooden chest; about 3′ 9″long x 2’3″ high and 2’3″ wide, made out of acacia wood and overlaid inside and outside with pure gold.

The chest was to have a golden frame with four rings of gold on all four corners where two long poles, also golden, would be used for transporting the ark.  These poles were never to be removed (v 15).   Read also Exodus 37:1-5.   God told Moses to put the stones with the Ten Commandments into the ark. (v 16).  The commandments  were the basis for God’s covenant with the children of Israel (Exodus 19: 5-7)

The ark’s lid was called the “mercy seat” made of pure gold!  Exodus 25:17   This was the place where “atonement” took place. Between the Shekinah (the LORD’s) glory cloud above the ark and the Ten Commandments of law inside the ark was the blood-sprinkled cover, (mercy seat).   This sacrifice of blood from a goat or a lamb was sprinkled by the high priest on the Day of Atonement, as an atonement for sin to satisfy God’s righteous anger.

On each end of the mercy seat were two angelic beings called “cherubs”.    They were to be forged as one piece with the golden cover of the ark and were to be facing each other, their wings stretching up and over forming an arch.  God’s presence did not dwell inside the box, but remained over the Ark, in-between the two Cherubim.  Here God dwelt “in unapproachable light” (1 Timothy 6:16; Psalm 104:2)  The high priest had to shield his eyes, because “no man shall see Me and live” (Exodus 33:20)  This was where God met with Moses (Exodus 40:9, 18, 34-35), exactly fourteen days short of one year since the Exodus from Egypt (Exodus 40:2; 12:6,31).  The two Cherubim on the Mercy Seat represented God’s glory (Hebrews 9:5; Ezek. 10:1-22)  Some of pictures show the Cherubim standing and some pictures show them kneeling, but we really don’t know except that the wings were stretched out, to cover the Mercy Seat; the wings of the two Cherubim possibly touched one another to form a complete covering.

I find it interesting to look up words in the Nave’s Topical Bible.  There are so many different references for the work “ark”.  I found “the contents” especially interesting, as it isn’t explained in Exodus.  The ark also included, besides the Commandments: Aaron’s rod that budded and the Golden Pot of Manna.  I will write more about them tomorrow!

How I pray that you are as interested in this part of God’s Word as I am!  The most exciting part is that it is all linked together with Jesus !  All one story from beginning to end!  Glory!!