The detailed instructions of the Tabernacle produced a place of strength and beauty. Each material, color and shape had significance and meaning.  When the Hebrew people came to worship the LORD, they were surrounded by symbols of His holiness and grace!  I believe it should be that way today when we gather in His House to worship, praise and adore Him!   Everything around us: the building, the rooms, the halls, the alter, the attitude of people, the music and words spoken….should still be “symbols of His holiness and grace”!!  I realize that each Christian is a tabernacle where the Holy Spirit dwells as we are told in 1 Corinthians 6:19 “Don’t you know that your body is a sanctuary of the Holy Spirit who is in you, whom you have from God?  You are not your own.”  But, when we gather in His House (“and I will dwell in the house of the Lord forever.” Psalm 23:6b) the strength and magnitude of the Holy Spirit that is there in His people should point to Christ’s Holiness even more!

The last two coverings of the Tabernacle of the Wilderness were significant, too. God just never does anything half way!  I love discovering just how important every little thing He does or speaks has meaning for us!  Over the Cherubim curtains and the Goats Hair covering was the Ram’s skin dyed red.

Ram’s skin is not red naturally, so it had to be dyed red. Red is representative of the blood shed by the sacrificial offering and by Christ for us and is shown throughout the fabrics. “He was oppressed and afflicted, yet He did not open His mouth. Like a lamb led to the slaughter” Isaiah 53:7 HCSB

Even though it doesn’t give the exact measurements of the covering; it was big enough to “cover” the complete tabernacle, which is an indication how precious is the sacrifice of Jesus: “This is my blood of the covenant, which is poured out for many for the forgiveness of sins.” Matthew 26:28 NIV   Peter wrote specifically for the Jewish believers when he wrote: “ For you know that it was not with perishable things such as silver or gold that you were redeemed from the empty way of life handed down to you from your ancestors, but with the precious blood of Christ, a lamb without blemish or defect.”  1 Peter 1:18-19 NIV

Very significantly, it was a ram that was caught in the bush that God provided to be sacrificed in place of Isaac (Genesis 22:8,13). We will see in Exodus 29, that God had rams sacrificed when Aaron and his sons were consecrated as priests to serve in the Tabernacle! The ram is the example of Jesus who was obedient to God, “And being found in appearance as a man, He humbled Himself by becoming obedient to death— even death on a cross! Therefore God exalted Him to the highest place and gave Him the name that is above every name,  that at the name of Jesus every knee should bow, in heaven and on earth and under the earth, and every tongue acknowledge that Jesus Christ is Lord, to the glory of God the Father.” Philippians 2:8-11 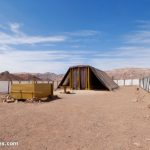 The Outer Covering of badger or dolphin skin forms a thick, protective, weather-proof layer over the Tabernacle. This provides a barrier against the heat from the sun or wind-driven-sand-storms or rains, and protecting the treasures inside the Tabernacle! This outside covering made the Tabernacle look ordinary and unattractive. Because it was a dull outer covering, it would not cause any external viewer to pay any attention to it. “He had no beauty or majesty to attract us to Him, nothing in His appearance that we should desire Him. He was despised and rejected by mankind,” Isaiah 53:2b-3

Today there is a lot of emphasis on being fashionable and conscious of our image! It is not that way with Jesus. What He possesses is real and eternal.  The rough fishermen of Galilee who became His close disciples saw this and declared: “we were eyewitnesses of His majesty” 2 Peter 1:16; and “The Word became flesh and made His dwelling among us. We have seen His glory, the glory of the one and only Son, who came from the Father, full of grace and truth.” John 1:14